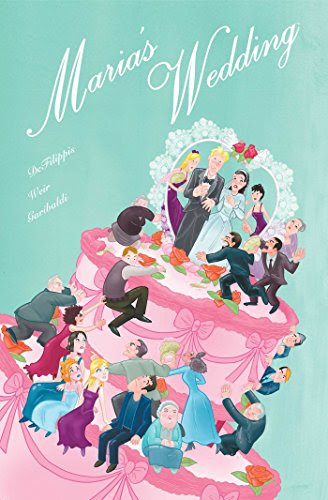 
When the same sex marriage of Joseph and Matthew splits Joseph's rather large Italian family. Joseph's brother Frankie speaks out about the situation, vowing to tell the family members who refused to attend and bad mouthed the entire thing off the next time he sees them.

A year later with their cousin Maria getting married, Frankie almost considers not going because of his vow. Yet Maria has always been one of his favorite relatives, and he wants to be there for her on this important day.

Frankie's still a bit worried at the reaction he'll get, but even more worried about what exactly he'll find himself doing when he sees those he vowed to tell off. Also adding an additional complication, is that one of the bridesmaids is an old teenage flame who he still has feelings for.

The situation of the story is familiar to anyone who has a family of any size. Perhaps not to the extreme of Frankie's, but everyone has relatives who are short sighted or only think of themselves. Who no matter the bloodties, are some of the last people you ever want to be around.

The art is really well done, the relatives resemble each other as they should, but still manages to draw each of them distinctly enough to be individualized..

I liked how they showed the importance of family, despite the negative things that the family can bring. By showing the love and strength that it can provide, a balance was struck that made the story seem a bit richer.

I really appreciated Frankie's ability to stand up for what he believes in. I have a family near the size of his, my mom is one of nine kids, and can relate to the bigoted beliefs he fights against. So he seems very heroic to me, to be able to say things that I would like to do as well, but sometimes lack the courage to.

Making this a book just something I could really relate to and enjoy. When I finished it I was a little sad, as I wanted to know what happened next (despite there being a fairly solid ending) because I'd come to care about the characters.

Maybe the team will do a followup?
Posted by James Schee at 8:32 PM

Hi i am totally blown away with the blogs people have created its so much fun to read alot of good info and you have also one of the best blogs !! Have some time check my link of wedding photography.