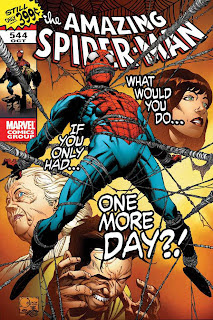 What Idiot Thought of This?

I'm not talking about the story here, there is enough talk about that elsewhere and since I haven't (and probably won't) read it I won't talk about it. Yet I would like to know who on Earth thought it was a good idea to highlight that a single issue of a comic was "Still only 399 cents!"

Is that really something you want to highlight? I know comic prices have gone up. Yet dang I dont think single issues have gone up to the point where $3.99 for a single issue comic was a bargain. Heck I can got down to any book store and pick up a Marvel Digest, 5 to 6 issues worth, for a little under $8.
Posted by James Schee at 2:24 PM No comments:

To pick up the current Spider-Man books, after reading the reaction and seeing the poll results from Newsarama has put together for Marvel's One More Day storyline that promised to change the Spider-man character forever.

Usually I pass up these events with a rolling of the eyes. Yet the amount of vitriol this story is getting, just has me so darn curious. I want to know "Is it really that bad?" If so it'll be good for a laugh, if not then who knows maybe it'll be a cool surprise. Something I seem to rarely get from Marvel's comics these days.
Posted by James Schee at 6:46 PM No comments:

What Am I Reading?

Well with the Christmas holidays having just past, money is sort of tight. Currently I'm not following any series religiously, but through the local library I am reading the Essential Incredible Hulk by Peter David series of trades.

I originally jumped in about midway through this series WAY back when, just as the Hulk and Banner were merging and we had the time of the Hulk with Bruce Banner's brains. Now getting to read this impressive run (hey there aren't many writers who have a run as long as Peter David's Hulk run) from the beginning has been intriguing.

In some ways it reminds me a bit of the V4 version of Legion of Super-Heroes by Keith Giffen and the Biernbaums. Since as with it, there is a sense of taking things merely hinted at (at best) and running with them to explain changes, takes on and even paths for characters that for one reason or another had never seemed possible before.

The strength of this approach is the break from the traditional superhero track of everything being back to status quo by next issue. Things happen in these stories for a reason, and their ramifications have lasting effects that not only change the characters but the very type of stories that are done.

The only drawback to this is that you can go too far afield from what the characters heart that made them popular. Eventually you get to a point in the story where the writer has no further to go, and the fact that its a corporate toy means you can't just end it.

I sort of wonder if this is why the Hulk comics have sort of struggled for a voice over the years since Peter David left? No one really seems to know how to do a Hulk book currently, be it Bruce Jones's monster take or what appears to be (just from solicits haven't read it) Hulk as intergalactic bad guy take currently.

Other things I'm reading from the library are:

Superman:Back In Action from Kurt Busiek and Fabian Nicieza - I haven't read a Superman title outside of Morrison's All-Star in... wow its been a few years. It was on the shelf though so I'm willing to give it a shot.

Friendly Neighborhood Spider-Man: Derailed - While its been a few years since I read a regular Superman title, its been since the Clone Saga that I read a regular Spider-Man title. Yet with me being on sort of a Peter David kick and that it has art by the late, great Mike Wieringo made me pick it up for a look.
Posted by James Schee at 11:27 PM No comments:

Putting Up, Rather Than Shutting Up

So they are having a contest at Newsarama to find a new superheroine book to work as a counterpoint to their popular Bomb Queen comic. The rules are simple:

Contest will be divided into three parts as outlined below, deviation will result in immediate disqualification:

Round One:
Contestants e-mail a BRIEF one paragraph story synopsis by January 31, 2008 to: superheroinecontest@gmail.com. Stories/concept must be original with original characters. No pre-existing characters may be used unless owned by contestant.

Round Two:
Ten semi-finalists will be chosen from all entries received by the above date and notified by e-mail. They will then be required to turn in 5 (five) fully scripted pages by February 29, 2008.

Round Three:
The five finalists will be announced and their synopses posted on Newsarama on March 10. Newsarama posters will be encouraged to vote on their favorite. (Writers are strongly advised to direct traffic to the contest via message boards, myspace, etc…every vote counts!) Polls will close on April 4, 2008.

The winner will be announced April 28 with initial concept art/character design by Franchesco. First issue will be solicited with a cover date of November, 2008.

I don't envy Shadowline editor Kristen Simon's job of pouring over hundreds, if not thousands, of submissions. Yet I have to admire her and the Shadowline folks for wanting to get new voices and hopefully stronger female characters in their mix of books.

For years I've been wanting to see more female characters who weren't defined by the sum(or should that be size?) of their body parts. So I said what the heck, and even sent in a couple of proposals myself. You know, sort of a put up or shut up situation here I thought.

Oh and don't worry those saying "Oh no!! Another comic blogger who really wants to write comics, rather than write about comics." I have no chance of winning, and plan to post my quite funny proposals up when I talk about those that do qualify for the first cut. So everyone can laugh at my propsals as I will surely do the same for some of those that make it. (whether because they are truly funny or because they are truly bad)
Posted by James Schee at 11:04 PM No comments:

Hello! Wow, I actually forgot this thing existed, and then had to think for a few minutes what the e-mail address and password would have been so I could log in. It has been kind of cool to look back and see what I was passionate about way back then.

These days I still read comics, not to the great extent I did back when this blog was active obviously. Yet its still one of the few interests I find that has such a variety of voices and selection. That I can also interact with to whatever extent I wish.

I don't have to sit through the same 15 actors and actresses over and over again as with movies or tv shows. Also since I mainly read trades I don't have to sift through ads and other junk to get the story, I just turn the page.

Hmm, maybe I'll revive this blog to explore my comic takes again, as well as what else I'm passionate about.
Posted by James Schee at 10:38 PM No comments: