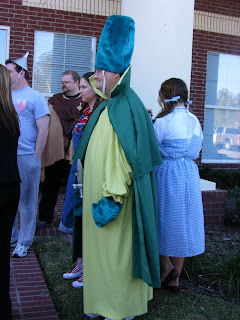 The night of Hurricane Ike was a difficult one, the days after it were no picnic either. Lights went off at 12:20 a.m. Saturday September 13, and did not come back on at my house until Wed. the 18th at 5p.m. Luckily we had a cool front come in during that time, or I'm not sure how we would have gotten by.

The day after the storm my family and I took an assessment of how we were. We had food and drinks, but our ice in the coolers was melting faster than we had expected. With no power or stores open it was amazing how important something as simple as frozen water had become.

Luckily we have an ice house in a neighboring town, and they were open selling off ice that had been made before the loss of lights. So that solved that issue, but another was becoming aware of the importance of keeping gas in the vehicles. Luckily there were stations that still had gas in their tanks and had generators. Yet still it was a 2 hour wait in line, and the first time we actually waited only to have the gas run out.

With Ike being such a wide reaching storm, commumications were down for a wide area. I had a battery powered handheld TV, something that I now realize will be useless when the switch to digital is final, and there were no TV stations on. Additionally there was only one operational radio station in the area. Which had some good to know news, we were lucky to not lose water services, but also a lot of repetitive items as well. Oh and as previously said, with no power cell phone service was non existent for days as even the cell towers had no power.

Add in curfews and it was so odd how a pattern emerged of basically going to bed when it got dark and getting up when the sun did. I must admit to feeling like I was visiting a past time or something the way things just were so different than normal life.

One thing I learned was how important things that seem like crap can be. My mom had brought these little battery power lanterns that didn't even give out enough light to see your hand by. Yet proved quite handy for lighting a pathway way in the dark of nightto the bathroom.

Even when power was restored, cleanup continued. I have a bundle package with Time Warner that gives me cable, phone and RR internet at a great price. Yet while power was restored on Wed., the TW services didn't return until the following Monday.

In some ways that taught me to find new ways to spend time, in other ways it just drove me mad in boredom and a feeling of disconnect from the world.

All in all its an experience I'll always remember, and am thankful it wasn't worse for me. People in Galveston and even just 30 miles to the south of me in a town called Bridge City had far worse with some towns having 98% of houses destroyed.

Hopefully I won't have to ever go through it again, and if neccessary I'll even evacuate to insure that I and my family won't have to.
Posted by James Schee at 10:11 PM No comments:

I've been meaning to do this for a while, but time has just been such an issue since Ike came through. For awhile after the storm with no lights, most busineses closed and curfews it was something I had plenty of with little to fill it. Afterwards its been the opposite, with so much to do from contacting insurance people, making arrangements for bills, getting back to work, etc. Time is just fleeting.

Anyway when I left off before the storm, the wind had been picking up but things seemed to be doing okay. Then all hell broke loose.

First up was the lights going off right around 12:20a.m early Saturday morning on September 13. We had flashlights ready to go, and for a while I tried to just sort of lay in bed and sleep through it. The sheer noise of the wind was just frightful for its odd sounds.

I couldn't help but think of the old stories about Banshees and people being drawn out into storms in the dead of night. I could understand it after hearing various sounds of the wind, from what sounded like mooing cows, and cats sqealing to the most frightful sound of howling babies and women screaming.

Add in this happening in the dead of night, with all power off in the entire area. That just added an extra level of chill to the experience. These winds and sounds lasted for well over 6 hours, occasionally I'd hear something hitting the house or would get the occasional glimpse of fallen trees.

Just a very frightful experience that I don't think I'll ever care to go through again. Of course afterwards came something nearly as challenging, surviving until things started coming back operational. Yet that's a whole other post....
Posted by James Schee at 9:56 PM No comments:

I'm still alive, though living in the stone age, or the next thing to it. No internet except here on a work computer, no cable and all the rabbite ears in a 100 mile radius are gone. They say it could be at least another week, its been tough though at least I regained power last Wed. and use of my cell phone. (cells won't work when the towers don't have power either)

The storm has really opened my eyes about some things, I'll definitely post some chiling thoughts and experiences about what happened during the storm later. Right now its back to work though!
Posted by James Schee at 1:12 PM No comments:

Still here, still have power. The internet connection went out for about 20 minutes, but it came back and is working fine now. Wind is in a bit of a lull right now, hopefully everything will work out okay.

On the news they said that the eye will be hitting Galveston soon, then the winds will shift. Still some rain to come probably, but hopefully I can get through this night with nothing bad.

More later, if possible.
Posted by James Schee at 11:36 PM No comments:

Still here, with power. The wind is blowing really hard, it sounds like an injured dog in some way. Sitting here with flashlights by us, and I have my portable TV and Ipod nearby in case we do lose power.

The worst part is likely to head here in a couple of more hours. Doing this has been a surprisingly good way to deal with the nervous anxiety this storm is bringing to me.

More updates soon I hope.
Posted by James Schee at 10:06 PM No comments:

Doing this a few minutes earlier than my planned update, as the lights have dimmed a few times. Still no rain in the storm as yet, but we're still barely into it.

Wind is picking up and we've lost one of the networks, NBC, which is located in a mall in one of the soon to most hit parts.

I'm trying to decide whether to put on PJs or not, I doubt I get much sleep, and there's a part of me that'd prefer to be dressed if something happens. I do know that next time there is a storm, even if I get out of this one without losing lights. I'm making hotel reservations at the first sight of a potential storm.

More later, I hope!
Posted by James Schee at 8:39 PM No comments:

Wind has picked up a lot here, I'm closely watching trees, they are small but have a chance of hitting the house. Though my roof is strong so they'd bounce off given their size.

Its been a dry storm so far though, no rain is coming down currently hopefully that continues.

More later, I hope to update around 9pm Central.
Posted by James Schee at 6:58 PM No comments:

Wind is picking up a little, its cloudy and some moisture in the air. Yet so far so good, though still a LONG way to go.

I'm amazed at the amount of idiots I'm seeing on TV though. Not only those who are going to the beaches and staying in Galveston despite it more than likely to be underwater by morning.

Yet there have actually been idiots here who are down from other states and are here to sight see and experience a hurricane. I'm reminded of the famous shirt, "Stupidity Isn't a Crime, So You're Free To Go."

Coming down to experience a hurricane, especially when as one moron on the news said "I'm from Kansas, tomorrow its my birthday and I wanted to come down for the hurricane for it." I mean damn, some people deserve to have nature take its course and be eliminated from the gene pool.

More later if weather and power issues allow.
Posted by James Schee at 5:03 PM No comments:

Everyone is gathering at my house now. There's me, my mom, an aunt and her son. My sister and one of her daughters. I'm the one with the most room, with 4 bedrooms. We're cooking sausages and stuff, watching the amazing footage on TV of what Ike's doing to Galveston.

If you haven't seen it go here,

Its amazing stuff. I think I'm a little nuts for staying, but at least I'm not driving on a road right next to the damn ocean.

More later as long as power issues allow.
Posted by James Schee at 12:44 PM No comments:

Something different today, as live from Silsbee TX, as long as the power lasts, I'll be blogging about Hurricane Ike which is hitting the area. Its been a weird experience this season, 2 weeks ago we had a mandatory evacuation called for Hurricane Gustav. I spent 2 days in Houston during it.

Nothing happened in the area, especially in Hardin County, and a lot of people were very angry. I wonder if that anger is why while every other county in the surrounding area has called for another Mandatory evacuation, mine has not.

Its too late to leave now, and with Houston being evacuated as well there are no hotel rooms closer that 8 hours away. With money having been spent on Gustav's evacuation, many people have elected to stay and hunker down. (a Texas term that amounts to duck and cover)

I'm far enough away from the coast that the 20 feet storm surge is no danger to me. Yet we are expecting winds averaging 55-60 mph and possible gusts as high as 80 to 90 mph. Its going to be a a scary next 24 hours.
Posted by James Schee at 10:36 AM No comments: