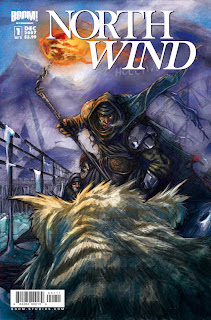 In the near future disaster has struck the world, and the planet is in a deep freeze. Humanity still survives in small pockets, and as always there are people who try to take advantage of others in the battle of survival.

I wasn't quite sure what to make of the series when I first heard of it. The basic plot sounded a little too close to the movie The Day After Tomorrow yet it turned out to be something completely different. Which is a good thing as the movie was pretty dumb in a lot of respects.

Its obvious from just the first issue that writer David DiGilio has put a lot of thought into what the world would be like in this situation. His story is immersed in the world and society he's built, not on any particular character. Which is a good way to go about it as this story shouldn't be about how things affect one character but how the societies themselves work.

Issue one is an interesting beginning to the series, and quite rarely at times these days has me anxious to see what happens next with a bated breath. I want to see who all of these players are, how and whether they survive and if the world gets better.
Posted by James Schee at 5:55 PM No comments: 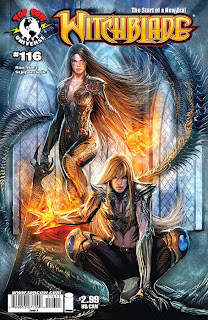 Sometimes it is easier to just write a book off as something and never look back on it. After all there are a ton of comics out there to be read, and if it doesn't pass that first test then you move on and don't look back. Witchblade was one of those series which I tried way back when it first came out and dismissed it as mindless T&A garbage.

So when Ron Marz, whose Green Lantern and other work I'd enjoyed, was announced as the new series writer I really thought he was nuts to be honest. Yet he talked me into giving it a try, and I'll be damned if he hasn't completely overhauled the series.

Gone are the mindless plots and generic bad guys. This book is at times a crime drama that just happens to have supernatural trappings to add flavor. One scene in #116 with Witchblade lead Detective Sara Pezzini going to a murder scene, could just as easily been something out of an episode of tv's CSI or Bones it just hit that note so right.

Gone also are the stupid plots designed to get any female character's clothes off. Oh there is still some teasing, but the book's grown up. The sexual teasing is more natural now and more something you'd see in a James Bond movie, not the sophomoric American Pie type of previous stories.

Painter Stjepan Sejic knows how to draw a variety of different characters and body types. His work is atmospheric and beautiful, while still keeping a feel of fluidity that so many other painters art lack. How on Earth he can meet a deadline with the insane amount of detail he uses I don't know but am looking forward to seeing.

This issue is the perfect jump on point for any new reader. The characters are all introduced and showed doing the roles they have in order to serve the story. New mysteries are just beginning for Sara and a new Witchblade user, that are sure to intertwine as they unravel in future issues. So if you've been thinking of jumping on board, the time really is now.
Posted by James Schee at 9:16 PM No comments: