With DC's recent penchant of killing off characters by the boat loads with each ongoing month. I was beginning to wonder when they'd reach their limit, but then I see that they are now adding two entire universe worth of characters. So hey, that's one way to add to the potential body count!:)

Okay, enough of being a smart ass. Newsarama has the news of DC adding the Milestone and Archie superhero characters to the DC Universe of characters. I'm a bit anxious actually to see what is done with these characters.

The Milestone Universe is one I still know little about, they started before I got back into comics. Plus I'm from a small rural, southern Texas town where diversity has a way of being ignored at times, so seeing them was a rarity.. What I have read I enjoyed, so the news that DC will be collecting the older stories, in addition to doing new ones has me curious.

I'm a little more weirded out about the news of the Archie superhero characters joining the DCU though. This isn't the first time DC tried to work with these characters. I seemed to be one of the few (some days I wonder if I was the only one!) that liked the !mpact line of comics DC did with those characters in early 90s.

This won't be those exact characters, but writer J. Michael Straczynski seems to have a plan for these characters. And if reviews of his Twelve series can be believed. He seems to do some of his best work with characters of this type who he can build and mold without fear of going against someone else's story.

So it could be an interesting time for DC ahead in the coming year. First time I've said that in a few years!
Posted by James Schee at 1:46 AM No comments:

Batman : Legend of the Dark Knight

I went to see the new summer blockbuster today. Anxious to see Heath Ledger's last role before his untimely death. His Joker is a demented, violent monster to be sure. Yet honestly it never really connected for me.

He claimed to be against order, but many of his actions were the definition of order gven his detaile dplanning. Even his violent acts were not shocking or really even that scary. Given that you aren't made to care for most of his victims, many of who are murderous crooks anyway, before their death.

That's basically the problem with the entire movie for me. I'm not led to care for anyone in the movie, which made the tragic events that happen to most of them have no meaning to me.

Take the Rachel character who is a carry over from Batman Begins, though with a new and new better actress in the role. She is sadly nothing but a trophy or prize in the entire movie though. Her entire role in the movie is something for Bruce Wayne, Harvey Dent and eventually the Joker to seek or control. Yet she herself has little character at all, leaving me to wonder why the men saught after her so.

Christian Bale in the starring role is an odd duck for me. He nails the Bruce Wayne persona spectacurlarly, be it as the dimwitted playboy acting, or the sardonic wit sparring with Alfred or Mr. Fox. Yet as soon as the costume goes on, the emotion goes out.

Batman just looks stiff and awkward on the screen, which makes all of these huge fight scenes with him look fairly lame and at times boring. I think that's more to do with costume design and special effects though.

Though perhaps its that the mask/costume hides emotion, making it hard to care. Comparing it to Iron Man movie, Batman is about darkly litted fist fights. While Iron Man had him blowing things up, shooting missles and the like. Much more visually stimulating. Perhaps if there isn't a better way to show emotion with the bat costume, they should go for more visual interesting effects?

All in all, I'm just left sort of underwhelmed by LOTDK. It just doesn't seem to have much heart in it, and while good Ledger's Joker grew tedious over the length. I'm certainly glad I only had to pay $1 for the movie. 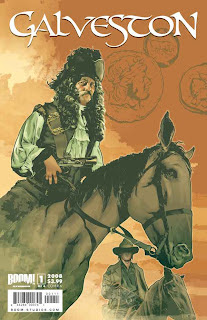 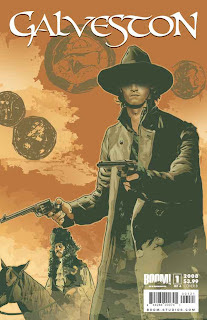 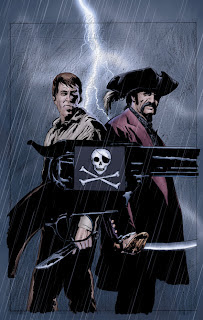 The press release follows, but I got to say this Galveston miniseries from Boom Studios is one of the most interesting new things I've seen in a while. People know stories about New York, Chicago, etc. Yet Galveston, TX is a hidden little town, that doesn't get a lot of attention though its had its share of great stories as well.

I mean how freaking cool is it to have a story with a cowboy and a pirate, and it turns out to be true on top of it. I can't wait to see this book!


PIRATES RULE IN BOOM!'S NEWEST MINI-SERIES GALVESTON
SIX-GUNS VS. CUTLASSES
AS PIRATES AND COWBOYS COLLIDE IN THE OLD WEST


Series editor Mark Waid said, "When publisher Ross Richie told me that the famous French pirate Jean Lefitte--true story--lived his later years in Galveston, Texas with his best friend, frontier legend Jim Bowie, inventor of the Bowie knife, I was gobsmacked. First off, I honestly thought that Jean Lafitte was the pirate who fought Cap'n Crunch. Second, the notion of Galveston being a Deadwood-type town run by a mad pirate had me screaming, 'put this on the schedule right away! Why am I not already reading this book? "


Focusing on these early exploits of Jean Lafitte and Jim Bowie, GALVESTON is an over-the-top thriller of blood, guts and revenge. Utilizing an extensive knowledge of the time period, Peyer and Rahner take history and turn it into an action-packed adventure comic that fans are guaranteed to love.


"It's a cowboys-and-pirates fable about the famous privateer Jean LaFitte and Texas icon Jim Bowie," said Peyer. "It's six-guns vs. cutlasses, heroic rescues and hair's-breadth escapes, seasoned with glimpses into the real personalities of these two legends and omens of their futures."


"Bowie could throw down," said Rahner. "This is the dude who once had a gun broken over his head, then got run through with a sword cane, and while the attacker was planting a foot on his chest to pull out the sword, Bowie gutted him with his legendary big knife. Then he got shot and stabbed again while the sword was still hanging out of him. This won't be any PIRATES OF THE CARRIBEAN."
Posted by James Schee at 7:52 PM No comments: