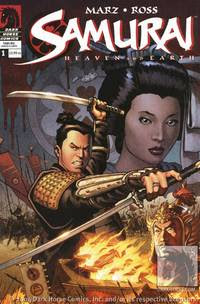 Dark Horse Comics continues to be a haven for fairly established work for hire talent, to bring their own projects to publish. I was really blown away by the cover, as Luke Ross's art is just so beautifully detailed, without feeling cluttered.

The story about a samurai in the feudal Japan of 1704, whose love has been kidnapped by his enemies. His quest for her rescue will take him to the empire of China, across Europe, and finally to Paris and the court of King Louis XIV's Versailles.

I know Ron Marz is a real historian when it comes to ancient cultures, so this book could be both exciting as well as interesting to see the different cultures of the past.


Hurricanes derail convention plans for some creators- Ron Marz, Brandon Peterson, Andy Smith and Rob Hunter had to drop their plans to go to the Baltimore Con this weekend. All four live in Florida, and with Hurricane Frances already doing heavy damage to the area. The news of Hurricane Ivan coming in the same direction caused them to change their plans.

Geoff Johns Board shuts down Visitors to Geoff Johns message board were greeted by this message when they tried to visit today.

Sorry, the boards are offline at the moment

Turned the boards off for a while to let everyone take a deep breath, and as a reminder that there is more to life than comics and yelling at each other about them.

Please take the down time to breathe deeply and slowly, and enjoy life.

We'll be back up later.
Thanks for your patience.

Nothing specific has been said as to what exactly became so heated that the board had to be shut down for a while. My speculation is that once again the "Great Green Lantern Debate" is the cause. More than any other topic in comics, it seems to draw the heaviest amount of nastiness and bitterness out of the fans who discuss it.
Posted by James Schee at 7:48 PM

I just got to see some b&w preview pages of it today, which I might see if I can get permission to post. Which looks really amazing, and could be something really nifty to read when it hits stands.