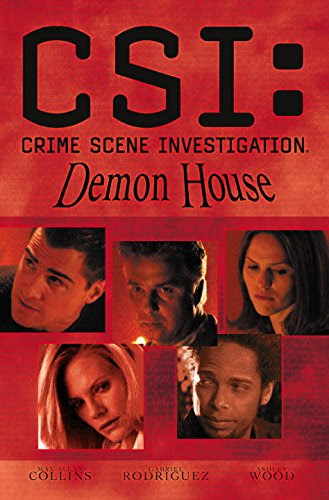 I just realized this, but IDW's CSI comics series is probably the best comic adaption ever. It really feels like watching an episode of the show, as the dialogue is spot on, and the art captures likeness well. Yet it doesn't forget that the characters must tell a story, so the characters still look like people not statues as too often happens.

In Demon House, the team is investigating a robbery at a charity Haunted House center, that rather than having ghosts teaches kids lessons through actors playing out various sinful scenarios. (drug abuse, adultery, spousal abuse)

The robbery closely resembles the M.O. of a string of convenience store robberies. Yet while there, an actor in one of the "plays" is shot and killed while on stage. Leading the team to split up to cover the two different, but possibly connected mysteries.

The writing is sharp, though I was a little disappointed about how easy the mystery wound up being. The journey the team went on to get to that conclusion was interesting, yet a little more depth would have been appreciated.

The art for the present time is sharp and does the likenesses well without seeming stiff. The flashback sequences by Ashley Wood take a bit of getting used to though. On first glance they are quite sketchy and hard to define, yet further study reveals an emotional undertone and careful attention put into each image.

The only thing missing was the cool "The Who" soundtrack that always opens the show. Going just by the cover alone, and my experience with the previous 2 volumes. I know to expect some teasing of a sexual nature going in, since those volumes had a large spotlight on the lead's underwear and had her nude in the shower once in each volume.

I kind of laughed and shrugged it off though, as I was really interested by the highly fun lead character. Who is a former meter maid, forced into being a partner for a genius criminologist who won't leave his room. So seeing her go out on these dangerous missions provided a fun adventure, in sort of the way the TV show Scarecrow and Mrs. King provided.

Then comes this volume, where I can't ignore the sexual nature of the story any longer. As it involved the lead going undercover at a school which is locked down under a bomb scare. Because a girl that went to the school was repeatedly raped and forced to become a prostitute by some really sick students at school.

These events are shown in great detail in the book, seeming to almost glorify in their horridness and made me wonder if they were supposed to get a gleeful charge out of the reader as well. Especially since these scenes are followed up with more crotch shots of our lead as well.

That's just too much for me, and has made me back away from this series in a permanent fashion.

I'll admit that I wrote off the MJ series, after trying issue #1 and saw the attention it gave to Spider-Man. I wanted to read about MJ's teen life as herself, not as Spidey's girl as she has often been portrayed as.

When I saw this collection at Target I decided to give it another shot, and was glad I did. The follow up issues really downplay Spider-Man's role, which is greatly appreciated. MJ's crush on him is easier to relate to as if it was a pop or TV start who we can feel there is no hope with. (despite knowing different)

This is the best I've ever seen the other kids in Spider-Man's teen world portrayed. From Flash's obnoxious front, that hides a deeper person than one expects, who has a deep caring for those close to him. To Harry's portrayal as something other than the rich guy who feels sorry for dorky Peter Parker.

These characters are really fleshed out and gives a more solid base for how and why they act as they do. The story of young love, and the insecurities that brings to have these adult feelings, but not the experience to know how to deal with them. Is nicely handled and really pulled me along.

This only collected #1-4, but I really want to hunt up however many issues of the series there are left.
Posted by James Schee at 9:50 PM

"This only collected #1-4, but I really want to hunt up however many issues of the series there are left."

There are no other issues--Marvel cancelled the series :(

Dang, and EW just put the book in the IT list too.

Yeah, this has to be one of the biggest examples of Marvel boondoggling. When they announced the series, they said that they weren't really going for comic shop sales--that they were going to collect it and market it in bookstores, etc. Then when the comic shop sales were really low (because who wouldn't be waiting fo rthe trade in this case?) they cancelled it before it even got into bookstores.

Am I the only one that feels like every time I start liking something form the Big 2 that it is doomed? It just seems like the relative few books they have that interest me in some fashion, just never seem to do well at all.

Hey, I have enjoyed...your blog is informative - even entertaining.

I have a halloween sites. They pretty much covers costumes and masks related stuff.

Thanks again and I'll be sure to bookmark you.

Hi, I was just blog surfing and found you! If you are interested, go see my ki toy related site. It pretty much covers ki toy stuff. I guess you may find something of interest.

I am searching around for fresh information
for my cc Infopage, 30,000 daily updated Information Pages about all kind of subjects.

It might interest you to know that your blog has been visited and has been read. I hope you enjoy your "Blogging".

I wish you all the luck I can, keep the good work going!

Get the eBay Business Box Today

Hello, just visited your blog, it's informative. I also have a Eay related web site. Please visit and hope that it's useful.

"I just came across your blog about ebay loadingand wanted to drop you a note telling you how impressed I was with the information you have posted here. I also have a web site & blog about **keyword** ebay loading so I know I'm talking about when I say your site is top-notch! Keep up the great work, you are providing a great resource on the Internet here!

"I just came across your blog about ebay comand wanted to drop you a note telling you how impressed I was with the information you have posted here. I also have a web site & blog about **keyword** ebay com so I know I'm talking about when I say your site is top-notch! Keep up the great work, you are providing a great resource on the Internet here!

Nice blog, my site is related to Gungrave check it out to find all sorts of cool Gungrave stuff. Gungrave

Informative blog you have here. Here is mine shopping site myspace.com

Who knows where to download XRumer 5.0 Palladium?
Help, please. All recommend this program to effectively advertise on the Internet, this is the best program!