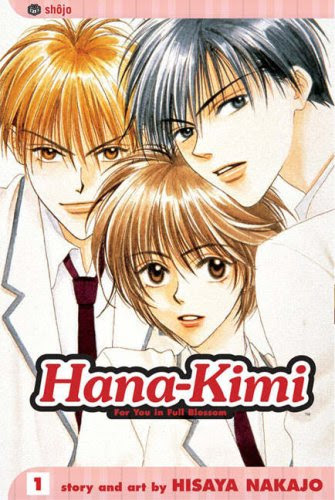 Mizuki Ashiya is a young Japanese-American girl who has engineered a transfer to a high school in Japan. She has a crush on Izumo Sanyo, a world class high jumper who goes there, and will do anything to meet him.

When I first heard of the concept my immediate thought was how similar that sounded to the television show Felicity. With the "stalkerish" obsession the two leads have with a boy they know little about. Yet this one has a strange twist in that it's an all boys school.

Ashiya gets around this by pretending to be a boy, and by coincidence winds up rooming with Sanyo. Things get complicated for her quickly though when she learns that Sanyo isn't quite what she expected him to be.

He's not only lost interest in the high jump, but his aloof manner toward everyone and his direct rebuff of her attempts at friendship shatters her preconceived notions of him.

Also complicated matters is the school doctor who learns her secret, and another boy who, despite himself, starts developing romantic feelings for Ashiya.

This is a comedic series at its heart, yet in its humor it does some wonderful exploration on gender expectations and roles. Such as when Ashiya must participate in the soccer game, despite not having any true interest. Because it is expected of her as a guy. Or how she must chide herself about not acting "girly" in how she shows her concern for those around her.

The most interesting aspect though, is her classmate Shoichi's growing feelings for her. He has some trepidation about those feelings at first, because he believes she's a guy and he never believed himself to be gay.

Yet his eventual acceptance of those feelings is really well done, and was the highlight of the book for me. Because its a mature take to have a character get over their own built in belief system, and be true to their own feelings.

The art is lovely detailed, with faces lavishly detailed and backgrounds full of realized. Sometimes it is a bit too much though. Some of the panels overabundance of details can make it hard to distinguish what exactly I am looking at.

The panel sizes and layouts are pretty varied as well. I couldn't tell in some instances what to read next and found myself reading things out of order.

Yet still it is a fun series, with likeable characters, in a story that makes me think and should remain fun for a while. There is an unconnected backup story, about a young girl being pulled in by a bad boy. The art was lovely, but I thought the characterizations lacked some of the heart that the series does. Or perhaps I just don't get the whole "bad boy" fixation one.
Posted by James Schee at 7:15 PM